TVs are getting bigger!

10 years ago, I would’ve looked at a big screen tv and wondered if I would ever own such a thing. I always believed that they were too expensive and only high class wealthy people could only afford it. But then again, that was 10 years ago. Prices have come down drastically since and the size of the screens have ever so gotten bigger. It seems like anything less than a 50″ HDTV is too small. However, there’s always a price to pay. With bigger screens, the energy consumption of these televisions have skyrocketed. Not to make it seem like they’ve become less energy efficient over the years, it’s just that bigger things usually require more power to make them operational. Since more and more people are buying bigger tv’s these days, the government took notice and Energy Star even revised their standard for TV energy efficiency.

The Energy Star requirement for TV’s greater than 50 inches will be that of 50-in tv category. If 72-inch HDTV meets all of the requirements of  50-in category, then it will receive an Energy Star label. So, Version 5.0 televisions will be 55-65% more efficient than those that are being used today. Today, an average American home houses just over 2 tvs. There are over 112 million households in the United States, which equates to approximately 225 million tv currently being watched everyday in America. Energy Star website approximates at 250 million tvs in America today. That’s a lot of televisions and the new specifications will help reduce a lot of kilowatts consumed!!

I love Cnet.com for their thorough research and product testing for whatever technological product you may be looking for. I did a simple search in their website for most energy efficient televisions and they recently posted an article describing just that. I will summarize their findings here for you.

The Samsung UN55B8500 55-Inch 1080p 240 Hz LED HDTV is not for just anyone, as it boasts a $4,000 price tag. However, it did deliver the best picture quality of any LCD tested by Cnet.com. Its tested operational power consumption of 136 watts is excellent given the size of the TV. It’s estimated annual operational cost is just $30.

The Sharp AQUOS LC46LE700UN 46-Inch 1080p 120 Hz LED HDTV is more affordable than the Samsung above, listed at under $1,400. This is rated as the most energy efficient of its kind, but the picture lighting quality was just average. The operational power consumption was tested at 102 watts and the estimated annual cost is about $22.

The Samsung UN46B6000 46-Inch 1080p 120 Hz LED HDTV is comparable to the Sharp above, listed at around $1,600. This TV gets a high rating for its style, but the performance is just average by its standards. The operational power consumption was tested at 106 watts and $23/year in energy costs. 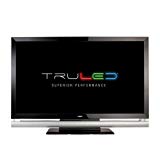 The VIZIO VF551XVT 55-Inch XVT-Series TruLED 240 Hz SPS HDTV provides excellent quality for the buck, listed at $2,200. The operational power consumption was tested at 162 watts with estimated energy costs at around $49/year.

The LG 47LH90 47-Inch 1080p 240Hz LED Backlit LCD HDTV is listed at $1,800 and provides extreme color and picture due to its backlit feature. The tested operational power consumption was 141 watts, costing you about $31/year in energy costs.

The Sony BRAVIA VE5-Series KDL-46VE5 46-Inch is not equipped with LED technology, but the price tag of about $1,200 and the picture quality performance are still respectable. The operational power consumption was tested at 125 watts with estimated energy costs at $37/year.

So, there you have it. If you’re in the market for a big screen HDTV, why don’t you consider going green and buy an eco-friendly, energy-efficient HDTV?